Video Premiere: Patent Pending “Spin Me Around” via Billboard.com!

Tip of the day: Did you know our Brooklyn-based homies Gangstagrass wrote and recorded the theme song for the hit FX show Justified? 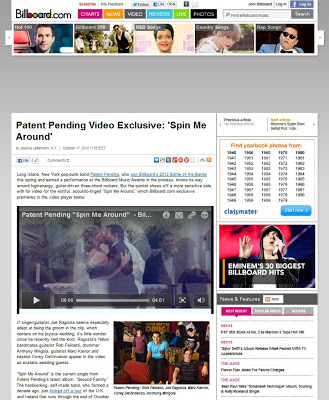 Today HIP alumni, Patent Pending debuted their heartfelt new music video for “Spin Me Around” on Billboard.com. Peep this great feature here and below:

Long Island, New York pop-punk band Patent Pending, who won Billboard’s 2012 Battle of the Bands this spring and earned a performance at the Billboard Music Awards in the process, knows its way around high-energy, guitar-driven three-chord rockers. But the quintet shows off a more sensitive side with its video for the wistful, acoustic-tinged “Spin Me Around,”

If singer/guitarist Joe Ragosta seems especially adept at being the groom in the clip, which centers on his joyous wedding, it’s little wonder since he recently tied the knot. Ragosta’s fellow bandmates guitarist Rob Felicetti, drummer Anthony Mingoia, guitarist Marc Kantor and bassist Corey DeVincenzo appear in the video as ecstatic wedding guests.

“Spin Me Around” is the current single from Patent Pending’s latest album, “Second Family.” The hardworking, self-made band, who formed a decade ago, just kicked off a tour of the U.K. and Ireland that runs through the end of October. How do I find a writer for my bio and press release?

and the HIP VIDEO PROMO team

can do for you

Check Out These Interviews

5 Things To Know Before Marketing A New Music Video

At HIP Video Promo, not only do we promote videos, we make them too! If you're in need of an official music video or lyric video, click below to learn more about HIP Video Productions!